There is a boy from the Gold Coast who I have been chatting with for a couple of years, since he was 18. He has family in Melbourne but we’d never quite managed to meet up…until a few weeks ago. He had very specific requirements – he wanted to be scared. I told him I thought he could manage that. By the end he was screaming and begging. He’s seen the video from the session and thinks he sounds like a woman – but I disagree. To me it sounds like a terrified, horny, teenage boy realizing that getting what he always wanted is far scarier than he ever dreamed. He won’t let me post the video, but he’s allowed me to post one photo….and his story from the session. 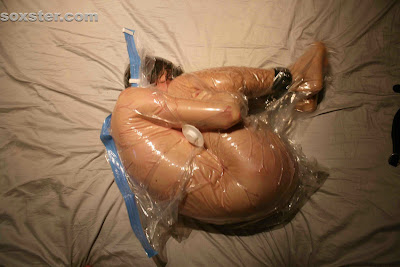 It’s a testament to the experience that my only complaint was that my squeals made me sound like a terrified cow…
It took a long time to organise the session in question… Personal circumstance, a healthy dose of worry and a lack of funds pushed it back and back… But then one day… It was tomorrow.
The night before I had been sleeping on my sister’s couch, watching episode after episode of David Attenborough, and with each dead gazelle my nerves tightened, and the butterflies in my stomach swooped. What was I going to do? It’d been so long that I’d talked with him… discussed what we were to do… I knew the plan… and my cock strained in my jeans for it… But the young boy in me still told me to run.
Yet still, I found myself at his door, back turned, waiting for it to open.
You already know how a session goes. Door opens, blindfolded… bound and toyed with. Body shaking, sweat dripping… soft, jagged breaths… moans and squeaks where you can’t tell if it was because it hurt or because it felt so good.
Most of us have been there, and know how it feels. Your cock throbs and your mind is both racing and utterly still. Those perfect moments of submission…
That’s when it’s easy; when it’s bliss. Then come those moments that test you; When you do something new that thrills you but terrifies you so coldly that your bladder threatens to make a mess right there on the floor (not that he would have cared).
First, like others, I felt layer after layer of cling film slowly wrapped around my body. I’d experienced it before, and craved it since, but this time felt so much tighter… Around and around, my limbs were bound in the classic position, flat on my back, with no chance of escape. Just to see what I could manage, I squirmed, and I knew I was helpless. While my trust in him was assured, it’s only natural to have a fleeting acknowledgement that if he wanted… I could be snuffed in a heartbeat.
That’s when I could hear him leave the room, as I struggled weakly on the bed. I knew what he was fetching. We’d discussed it. We knew what I was in for…
I was cut loose, and fumbling with my blindfold, I felt myself shoved into the tight confines of the plastic bag. It crinkled loudly with me inside it, but I knew that it wouldn’t last. I slowed my breathing, trying to drown my lungs in air in preparation. I’d imagined this moment for so long. Would it feel like I expected?
In short, no.
When the vacuum turned on, I felt it shrink around me. But soon enough it closed tightly against my skin and I thought it was done… but then it went tighter… and tighter… My whole body was compressed, every part of me tight against the plastic. My face could feel itself almost crushed by the plastic, sealing me in.
I’d practiced on my own, holding my breath, but when it really happens, nothing can compare. Within seconds my lungs were struggling. My body shook, trying to create any space for some air. All I did was make my prison shake comically.
The first time I was released fairly quickly. I gasped, I whimpered. But before too long I was sealed again, and this time for so much longer.
My position was changed slightly. I had a bit of space in front of my face providing a little reserve of air, but it didn’t last long. Trapped so tightly it ran out quickly, and this time he let me suffer. I coughed, and started moaning. My lungs were already screaming, and so was I.
I distinctly remember trying to speak, trying to call out for help. I shrieked and howled, and so desperately tried to break the plastic. I’d wanted this for so long, and though my rock hard cock betrayed me, I wanted freedom once again.
He was nice, merciful, and let me out. I had never felt so grateful for a full breath, a moment of respite. But in a moment straight from a fantasy, he grabbed my head and tried to shove me back in.
My weakness foiled the moment however, as I sobbed and tried to crawl away. I was held for a time, as I shook. For all my posturing and confidence, with just two encasements, I was reduced to a boy. I was so terrified of that bag, but the whole time I was erect… naturally.
With some coaxing I went back into the bag, and that was when I made peace with my situation. That was when it became perfect, and inarguably one of the most erotic experiences of my life. Sealed, suffocated and released, over and over. I’m not sure how many times or how long, but by the end I was so exhausted I could barely move. My arms were weak, my legs useless. I couldn’t cry, I couldn’t protest. At one point I remember thinking “thank God I peed beforehand, or it would have flooded the bag”…
I’ve seen the pictures and video of it. It might be narcissistic, but I enjoyed seeing myself that way. Proof that sometimes I get to experience the extreme…
I just wish I screamed like a man…
Oh well… I’ll work on that for next time… And I assure you, there will be a next time.
_____________________________________
Nice story, isn’t it? The boy in question wanted to know what people thought of his experience. Email me at soxsterchat@gmail.com if you have any comments or if you are a horny young guy who wants this to happen to you….