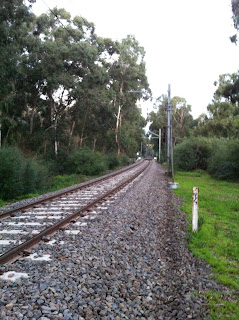 There is something very satisfying making love on railway tracks at night.  I was a teenager who was hanging out with a fuck buddy and while we had access to a car, we didn’t have anywhere to go. It was about one am and we walked along the railway tracks and one thing led to another. We didn’t know if the last train had passed or not. We were out in the country – at the very limits of the metro network.

Unlike London and New York you can quite safely have sex on train tracks in Australian cities as we have overhead power. No energized third rails. So it is perfectly safe to suck and fuck on railway tracks – provided you don’t get hit by a train.

It was night time, a couple of kilometers from the nearest house, and the sound and lights of any passing train would have been very obvious well before it reached us.

Nonetheless to a couple of teenagers, it felt dangerous and exciting. While there was plenty of time to get off the tracks there might not have been time to get dressed and there was a real risk of a train driver seeing us bare-assed besides the train tracks.

The number one safety tip for fucking on train tracks is to use a condom and plenty of water based lube.  The second safety tip is that in a large number of accidents, it is the SECOND train that kills people. People see one train pass, think it is ok to cross and get killed by the second train coming the other way. So if you are crossing train tracks, or fucking on them, make sure that you stay well off ALL the tracks when you see a train coming and don’t cross or start to fuck on them until you can’t see a train in either direction.