You might remember Alex from his story that I published on 5 June. He was visiting Australia recently and came for a session. I didn’t have a lot of time unfortunately – so I needed to multi-task playing with both him and a cute puppy boy. Here is Alex’s recollection of his introductory session.  I think there will be more to come…

Message me before you leave for instructions. I’m ready. The instructions followed.  Arrive at door of the apartment block and call. One final check. Heart racing. Calm down. Calm down! You have chatted online, never heard his voice, never seen his face. What are you doing? My brain kicked in. That was why I was going. That was why I needed to go. It wouldn’t slow my heart rate.

I can’t remember getting down the stairs. One block passed, every step made faster by my heart rate. You shouldn’t do this. You are in a city you do not know. Brain takes control. You want to do it, you need to do it. After all what could go wrong. It is amazing how the needs of the brain overrule the sense of the brain at moments like this.

I was outside the apartment block. Damn – the phone wouldn’t connect. He will come down. I wait, every noise makes me look up but he doesn’t come. More instructions. Door on the side. Go in blindfold on and wait. I did as per the instructions.

I heard footsteps coming down the stairs. Suddenly I could feel breath on my face. Above my face. He was definitely taller than me. Tshirt off. Leather strap attached to each wrist. Next instruction, shoes and socks off. He put out an arm to support me. First sign of safety. Hood over my head. Heart still racing. Pants and Jeans off. I complied. Leather straps attached to each wrist. He was to my right. I could sense that. Yet hands were stroking me to the left. One hand, then three hands, we were not alone – or was my mind confusing me. Turn round and count to one hundred then come up to the apartment as instructed. He (they) were gone. I counted, slowly as instructed. What was I doing going slowly? I was standing naked in a public stairwell counting. I did as I was bid. Common sense said to hurry. Instructions told me not to, the instructions won.

100. I started to go up. It felt further than I thought it was. Stand outside the apartment turn your back and put the blindfold back on. I was now standing on a very public corridor. Apartments to my left and right. I knocked. The door opened and I was pulled in. Again I could feel a tall and strong presence in front of me. His breath was reassuring. My nipples were pulled. My cock and balls felt. I was then led forward. Then to the side, then round then a push. I was on a bed. He instructed me to pull myself along. I did as I was told. Kneel and put your arms by your side. Turn slightly. Rope was quickly but carefully woven to my right leg. Once completed it was attached to the leather band. The same was repeated to my left side.

A sudden rip of sound and I was being covered in a plastic film. As he worked from my next down to my waist he got faster. His expert hands covering every inch with precision. I could not see it but could feel the care and attention that he was giving to the task. Then a sharper sound  – tape this time. Again the same precision and care applied to ensure that there was no scope for manoeuvre. He twisted me around and then he pushed me – telling me I would fall. I had no sense of distance or space.  I fell on my side. I had no control but I felt safe. You would not know from my heart beat. The same followed with my legs and feet. First the film until covered fully. Then the tape. The shallow pillow was removed and a larger firmer one put in place. The heat internally was incredible.

Then he confirmed that he did have someone else there and he would be spending his time with them. Initially I did not know what I felt. Jealous – maybe – only because the other person had seen him. I wanted to see the eyes of the person who had just applied such care and precision to the body of a person he barely knew. Yet in reality I felt intensely safe. I haven’t had a feeling like that for many years. He felt sure that I could cope with it. I felt safe and respected because he trusted me enough to let me be there and to take the care and attention that he had. He left. He returned  – the hood was put back on me. He left again. I was to shout if I needed anything. I have never been more conscious of my breathing.

The hood distorted the sound. I was waiting to hear if he was doing anything with noises I would recognise. I could hear conversation. Odd words seemed clear. Then sentences. It became very obvious that I could not really hear the words. My brain was converting sounds into words, convincing me that they were talking about me. How narcissistic is that? It carried on. I thought I kept hearing the word “him”. Then my mind tuned into my breathing. Suddenly realising that my breath was short. I slowed it down and calmed down. Then the TV came on. Laughter. Loud Laughter. What were they laughing at – was it me. They were in the other room. The two side of my head competing with each other  – one trying to convince me they were laughing at me – another saying they were laughing at the TV. In reality – it didn’t matter. My attempts to listen led me to avoid thinking about breathing to the extent that from time to time I wasn’t. A sudden realisation was then met with a deep gasp. My concentration in what he was doing stopped me checking that I was doing what I should be doing- i.e. breathing.

Someone came in- a firm stroke to the groin area. A pull at the nipple areas. This was repeated randomly with different degrees of intensity. I heard a metal sound. My heart pounded. Then it went away again. Wasted anxiety? No, just the horniest most intense feeling. No amount of laughter from the other room would take away from the what I felt and the intense attention I felt he had given me. That meant more to me than sitting on a sofa watching TV. I have to admit one part of me wanted to know what it would feel like to be the other man – the one who saw his face, saw him laugh, shared in watching what he was doing,  saw what a man bound in film would look like powerless and still on a bed.  Yet I knew through the attention he had given I had got the better side of the bargain- this time.

He returned – the groin area was exposed. Firm hands groped, pulled back the foreskin and pressured it. Then a cold feeling under my balls. Through my legs and a finger in my ass. Probing pushing deep while my cock was being pulled. The feeling of my ass being invaded was intense. I knew this was the most gentle experience my ass would probably have with him. It still felt intense – he had access to it and could do what he wanted. He was limited in what he did do – this time. That is when I knew that despite being in tune and feeling both safe, and incredibly turned on. I wasn’t showing it where I should be. That is a great disappointment to me but I will not let that tarnish the intensity that I felt.

The film was cut and I was unwrapped then untied then unclipped. He pulled me up and walked me to a space. He put a bag handle in my hand. Do you remember where the stairwell is? When I put you outside go back there, get dressed and leave the bag.

I hadn’t seen, felt or tasted a part of his body apart from his hands and his breath and yet this was intensely sensual. An amazingly deep experience for the first time I had ‘met’ him. I wanted more but knew he had given me what he knew I needed this time. He knew I needed to trust him to let myself truly go with him on an exploration of needs. He knew that in leaving I had felt scared but safe. Anxious but calm. Aroused but flat. Nervous but secure. Brave but scared. 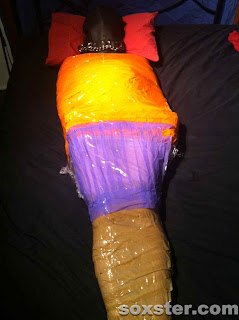 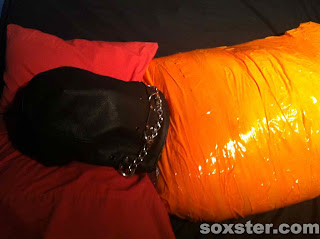 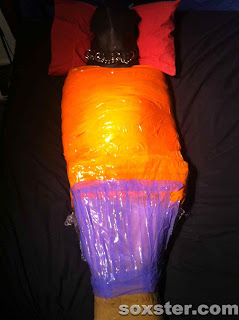 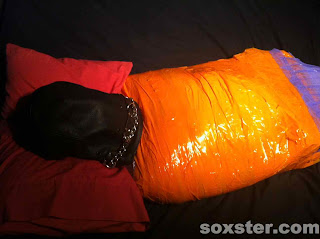 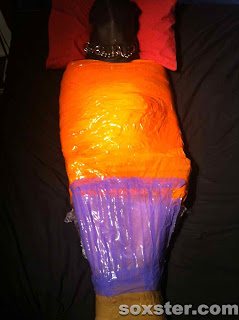 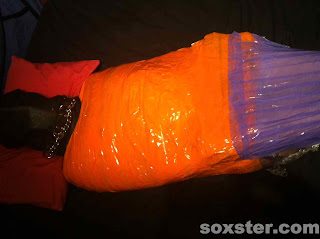 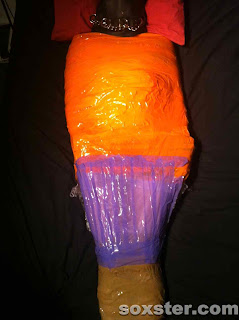 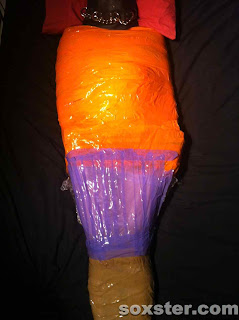 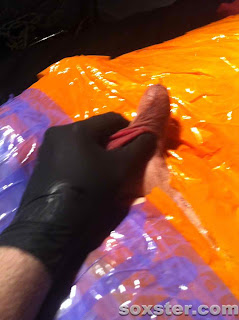 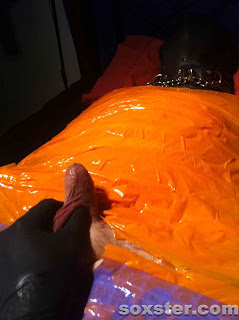