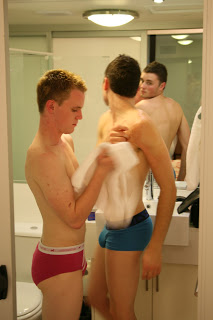 Later in the evening I started to look for the boy I came with. I couldn’t find him anywhere until I located him in one of the dark rooms with a hot guy on his knees in front of him.  He grinned and said he was having a good time. He was my lift home so we agreed to meet up in twenty minutes but he ended up being in the dark room for more than an hour.

One of my favourite moments was watching a group of young guys talking  to each other while one of the hottest boys there, a young guy with glasses and shaggy hair, was rimmed by a guy kneeling behind him. Very hot to watch.

I did wander through the dark room. One of my friends describes me as being “hugely popular and popularly huge”. It turns out people in dark rooms like thick massive cocks – who knew?