Top the Girls, Taken by Men 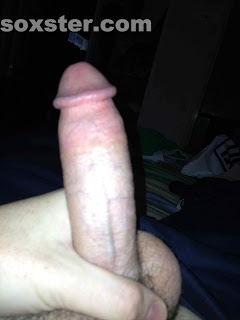 Over the years I’ve worked over a number of young bi boys who love fucking girls, but love getting worked over by men.  I think that it’s something that is increasing. The internet has given young guys access to a range of porn and options that they never would have been able to explore otherwise. I’ve always really enjoyed working over young bi boys and I think I’ve just met a new one online… He lives inter-state so a session probably won’t happen for a few months.  He’s eighteen, bi and interested in bondage and sports gear – so I’m going to refer to him as being my ball boy.  I asked him about how he got into this – and it turns out is all relates to some experiences he had growing up – which he has kindly written up.

He even included a pic of his 18yo cock….enjoy.

My first gay experience is also sort of my first bondage experience too, it all starts off when I was young (about 12) from his guy who at the time was my best mate, every sleep over we would play games where we would take turns in tying each other up, and then watch them suffer and try and get out. Once they did, the other person got tied up. I didn’t really think of anything at the time seeing as I was young, I could have even been younger then 12 cause I hadn’t known what a boner was then haha.

I use to always just love being captured in his hands and not being able to be free, it excited me, but not sexually then.

As we grew older, we figured out better ways to tie each other up, using different things and materials. I started having a fascination for socks, used socks, so one sleep over as I was wrestling him, I shoved my dirty sock in his mouth and he was disgusted and very angry.  I laughed and told him ‘paybacks always a bitch’, which was basically me trying to tell him to do it back to me!!

Next sleepover he pinned me down, sat on my chest with his crotch in my face and my cheeks against his smooth thighs, he straped a belt around my arms and tied it, then got a sock off his foot and tried to shove it in my mouth (at this point I knew what a boner was and old enough to get them so I always had to hide them) I have to make it look like I didn’t want that sock in my mouth but really I was drooling for it, so was the tip of my cock.

He spat in the sock and taped it on my lips. Later on that night he used his footy boot as a gas mask and at the time I’ve never been so horny in my life, I took as many breaths in as I could before he took it away. He had bunk beds, so he got two belts put them through my underwear then though the top bunk and pulled the belts giving me a wedgie, also making me move towards his crotch, I was so close to his cock, I pretended to pull away but I was him to pull tighter, I wanted my face all in there, I knew what I wanted but had to act like I couldn’t.

Few more years passed and we started ‘bitch times’ – we would make a bet, and loser was the winners bitch. I was the first bitch, he took me to my room taped my arms and legs, then gagged me with his fresh raw dirty footy socks he just played a game in, I WAS IN HEAVEN, just when I thought my cock couldn’t get harder and my heart couldn’t race any more, he took his shorts off and was wearing tight tight skins, he shoved his crotch in my face making me smell his sweat and taste it, boy were they sweaty!

One sleep over we were jacking off in separate beds under dooners, when he mentioned how tired he was wanking. I pretended not to care and agreed, but my heart was racing thinking ‘I’LL DO IT FOR YOU”! then it was like he read my mind almost, and said ‘come up here’ and that’s when we started sucking each other off, I was in heaven, I stroked his hair as he did, finally, finally its happened.

My second gay experience, was with this guy I knew through my brother, he went to school with him, then later came out gay, he use to chat to me on facebook and I would joke about him cuffing me as he was involved in police, one day he called me up on the offer, we talked a bit more, I realized he was serious and he started offering more. First time we met we just sucked each other off, I was so nervous, shaking, heart racing, I avoided doing anything until he grabbed my cock and stripped, and sucked me off, but boy was I scared.

Next few times we met, I had to be in full footy gear, (shorts, socks, skins, boots, jersey etc.) he came through the door, found me lying there, passionately kissed me whilst rubbing my cock, he took me to my bedroom and I was so scared because I knew we were gonna fuck, which I had basically no experience in, he stripped me down, gagged me with a sock, and slowly made his way exploring my body, then he pulled my legs behind my head and my heart skipped a beat, I was shaking, scared, so badly wanted to yell out ‘STOP!’ but I didn’t, he lubed me and himself up and started at me and smirked, he knew I was scared, he slipped it in and I let out a big sigh of air, shocked at the coldness of the lube, and also the pain, he kissed me again and inserted the hole way, it hurt so much but I didn’t wanna pussy out and tell him to stop, so I took it, he fucked me for so long, pounded me, then asked where I wanted his load, I scaredly yelled, wherever! So he pulled out took off his condom and shot a massive load all over my face, in my eye, mouth everywhere!

He fucked me again, but this time came in my ass in his condom, he left it on my bedside table and left, so I used it as lube and an after drink 😉