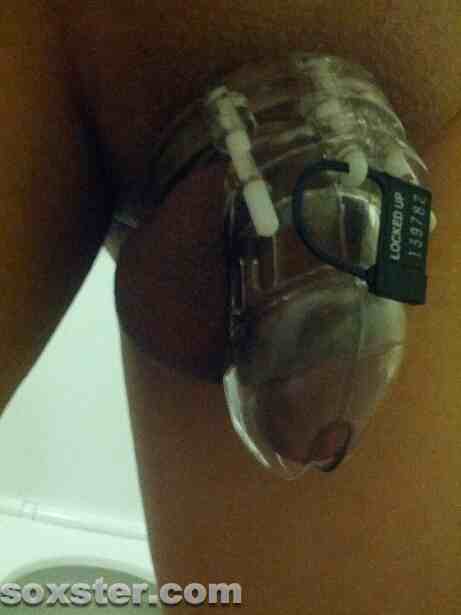 I invited Oliver back for another session… It obviously went pretty well as we got quite a few viewers on Cam4. When I mentioned Soxster, it actually crashed the site.  😛  We’re upgrading!

I’ve included some pics of Oliver’s cock in the CB prior to him coming over.

Here is how Oliver remembered the session:

Hi Sir, thanks for having a second session with me. Here is the write-up of what I remember. The sounding was so intense!…

It arrived on Wednesday (3rd day of no ejaculation) and the anticipation of fun turned to disappointment when I had difficulty getting the CB on. The main problem was that I didn’t have low-hanging balls. It was one day later, after a lot of tugging, stretching, massaging and erection-fighting before I finally managed to wear it properly.

I remember my first reaction when wearing it was a sudden sense of panic… I couldn’t touch myself anymore. For a guy that loves edging, it was like a loss of your best friend and favourite toy. I took it off rather quickly after that.

After trying it again (more determined this time), the main problem I found (amongst many others) is ‘ball-sac retraction’. Sometimes my testicles decide they want a ride back up into my groin and with the CB in the way, it was like a battle between an immovable object and an unstoppable force. The result is a sharp pain in my balls as if someone had a vice-like grip on it. And when it wasn’t a sharp pain, there is a constant dull ache of tugging and tightness. Frequent tugging and readjustments were required. I had to keep pulling my ball sac every hour or so. It felt like I was wearing a slave collar, but this time it was around my balls and no one could see it. That is, except that people might wonder why am I walking strange? My balls get splayed to the sides and my thighs would chafe and push my testicles against the CB. I had to wear a sock around my cock and CB to stop the chafing. But I was still walking funny. I told my colleagues I hurt my leg. I had to walk slowly and sit with my legs apart all the time. I don’t know why I kept thinking that only prostitutes and sluts figuratively keep their legs apart all the time. I was literally doing it all the time. It felt a bit degrading that couldn’t walk (or run) properly anymore.

But the worst part as you can guess, is that I couldn’t enjoy myself. I really missed the pleasure of edging and the feeling of having an erection. Instead I had a constant reminder that I had a collar around my balls and I couldn’t touch myself. I admit I was desperate enough to rub the head of the plastic CB, hoping that somehow I could magically pleasure myself. I know it was a bit pathetic…. But I did discover I could get some pleasure from rolling a cotton bud tip on the cock head to get some stimulation. That lasts for about 5 seconds. And it invariably ends with me suppressing a cry when the CB crushes my cock, my cock refuses to give up, a cotton tip stuck inside the CB with the stick protruding out and oh sh*t I can’t get my pants back on.

By 11am Monday, I was already having trouble holding my head together. I had such a long list of grievances. I couldn’t get an erection. It was humiliating to pee sitting down. I hadn’t cum in a week. I couldn’t walk properly. My cock had a ridiculous sock on it. The CB was uncomfortable. My balls ached and my groin was constantly throbbing as a battle raged between the wannabe erection and the unforgiving CB. Seriously I don’t how people do this long-term. There was another 9 hours to go and I think I had a look of desperation on my face the entire day. I swear even the clock was mocking me. By the time I finally met Sir (I was blindfolded and have actually never seen Sir before), I’d lost all sense of dignity and just begged Sir for an erection. It was only the second time that I had met with Sir and I was still scared about what he might have in mind. But strangely, that didn’t stop me from begging for an erection. I was THAT desperate. I would have begged anyone for a hard on. But it was so confusing to be scared of someone and to beg for pleasure at the same time. I remember complaining (whinging? sniveling?) that I hadn’t had an erection all day or its been so long since I’d cum. I wasn’t sure why this might move him but I was already feeling a bit pathetic that I had to beg for an erection from someone I’d never seen before. But when you’re desperate, you’d give anything a try right? Maybe Sir might have a pity bone in him somewhere. But I guess it was no surprise that Sir didn’t seem particularly sympathetic to what I wanted. Instead he made me play with his balls and get on my knees to suck his large cock. OK… no pity bone, only a boner…. I also remember he started lecturing me that it wasn’t about my pleasure, it was about pleasing him. I remember Sir also asked a few questions (can’t remember what) but it was difficult to answer when you have a mouth full of cock.

I admit I’m not the best sub around, but I did try to please him cos my balls were at stake. Thinking back, I must have done a lousy job because I couldn’t follow Sirs instructions. Sir told me to stay silent when he bit my nipples. OMG that really hurt there was no way I couldn’t cry. People have discovered before, I’m hypersensitive to everything.

I was so thankful when the time finally came to take the CB off. It was bliss and it was such a relief to finally get hard. I was just happy lying there. Didn’t really care what was going on. But then things got nasty with the sounding. Initially I didn’t know what it was, except that it was a stinging and burning sensation at the tip of my cock. Other than being anally probed, I don’t think I’ve ever felt so violated before in my life. It reminded me of going to the dentist and getting a needle in my gum. Only that this wasn’t going to make things numb. It was also burning, like a soldering iron was being used there. I was panicky. It just stung like crazy and I just wanted it to stop. I was seriously begging for Sir to stop. But then Sir started taking requests from Cam4. And the request was a sounding. OMG don’t do that. These Cam4 guys are goddamn crazy sadistic people who either collectively love a sounding, or they must like hearing the sound of me begging and pleading. Even now, I’m still not sure which sound they liked.

I am guessing this part probably didn’t entertain the viewers enough and there was probably another request for a sounding. OMG why can’t I just keep sucking cock? You Cam4 guys are all bastards! I was begging and pleading so hard for Sir not to do this again. I was seriously begging for Sirs cock instead and it was so humiliating to be told that I wasn’t good enough to suck his cock and that he didn’t want me anywhere near his cock. And then to make matters worse, Sir started jerking me and I was getting hard, I thought maybe he had changed his mind. But then he said “Oh you’re still going to get a sounding”. That was EVIL. Pleasure turned into torture. I hated what I was going to get and I was begging for something else (ANYTHING ELSE!) and I was being forced to get hard. I think this was the first time in my life I didn’t want to get hard anymore. But dammit, my cock didn’t care, it was always going to get hard and it doesn’t seem to care about future consequences. Then when the dreaded sounding came, it was conducted as a public demonstration and exhibition on sounding- with a trapped and howling patient. I felt so used. I remember I was screaming and struggling a lot.

I remember there was also a Cam4 request for spanking. You guys are serious pain junkies. I didn’t need to be spanked. I am way too old for that! I needed to be edged. Why couldn’t anyone just enjoy a simple edging once in a while? I recall the only “tame” request was pissing. I don’t really know why that would be interesting either. And pissing on the bed doesn’t seem to be very practical. It seemed like a lot of effort to move to the bathroom. But oh joy, I think Sir finally decided to edge me instead. It had been so long since I’d felt good. There were just waves of pleasure and the abrupt angst of trying not to cum. I swear that was so much more fun. But after I came, was it another Cam4 request to keep milking me? That was cruel. I was already spent. You couldn’t possibly get anything more out of me. Why ruin an orgasm with a 20 to 0 countdown of continued jerking? And the countdown slowed down too. PUH-LEZE don’t do that! It’s really intense. I’ve already been mocked by a real clock for 9 hours today.

The session was nearly at an end. But I had to endure a final public cock size comparison with Sir. I am so thankful I had a hood on. Viewers can already see I’m not a big guy but did we really need to drive the point home with that kind of comparison? Even though I had the hood on, it was so humiliating to be compared like that online. I was just glad the session ended after that. Sir said there was a peak audience of 130 viewers (cool!). But what surprised me the most was that there was a Mistress viewing as well. I wondered what she would have done? And just like last time, I was dressed and pushed out the door without ever seeing who Sir was. I found it strangely amusing to be used like that. But it wasn’t amusing anymore when I discovered that pissing came with the painful burning sensation that was similar to sounding again. Ugh, how long is that going to last? 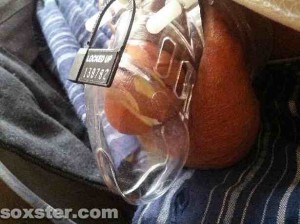 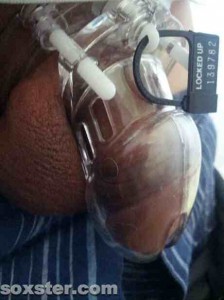 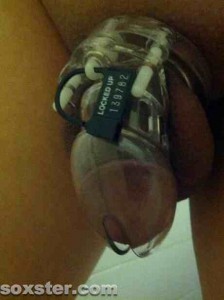 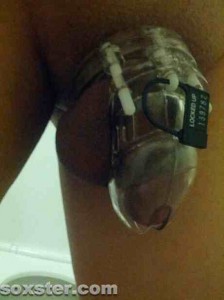