Not everyone is for everyone…

People look for a lot of different things in their sexual partners. Everyone has different things they are attracted to. Which is awesome. One of the things that a lot of young gay men have a difficult time coming to terms with is that just because you love someone then they don’t have to love you back. It’s a VERY hard lesson to learn. It’s very easy to convince yourself that if you love someone deeply and passionately enough, then they are under some sort of obligation  to reciprocate your feelings.  “If only they knew how much I loved them then they’d love me back” is an oft heard cry.

I know from experience that it is very hard to convince a young gay man that if the objective of their affections doesn’t love them back, then it’s absolutely ok because if someone doesn’t love you back then it’s never going to be anywhere as good as when someone loves you.

It’s almost impossible to convince someone of this fact until they’ve experienced mutual love. Once you do – and realise how much better mutual love is over unrequited love – then rejection becomes easier. You realise that being in love with someone who doesn’t love you back is kinda pointless when there is something so much better out there.

The second point that’s worth making is that if someone does have a crush on you, thinks you are attractive or wants to marry/fuck/love/make out with you, then that’s pretty awesome. If the feeling isn’t mutual then be polite. Not everyone is for everyone.  There are older guys into younger guys (guilty), younger guys into older guys and people who stick strictly to a particular age, race, body type, etc.  And that’s ok. Who you are attracted to is something that makes you who you are.

I once saw an interview on TV where a celebrity who had a reputation as being a bit of free spirit, but was actually straight, was asked if he minded if gay guys hit on him. His answer was really sweet, “Hey, if anyone tries to lay me that’s a plus”.  So I’d encourage everyone to say yes enthusiastically and no politely – secure in the knowledge that if someone expresses interest that’s a nice thing.

I ofter as Exhibit A for what NOT to do, this 18yo kid from Grindr…. 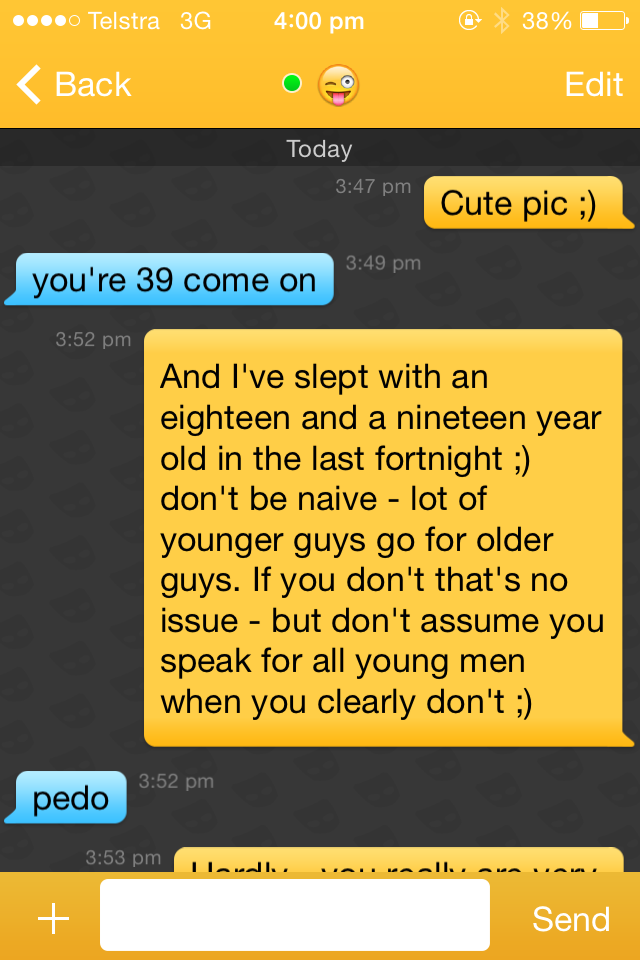