Review of the Star Wars party from sub 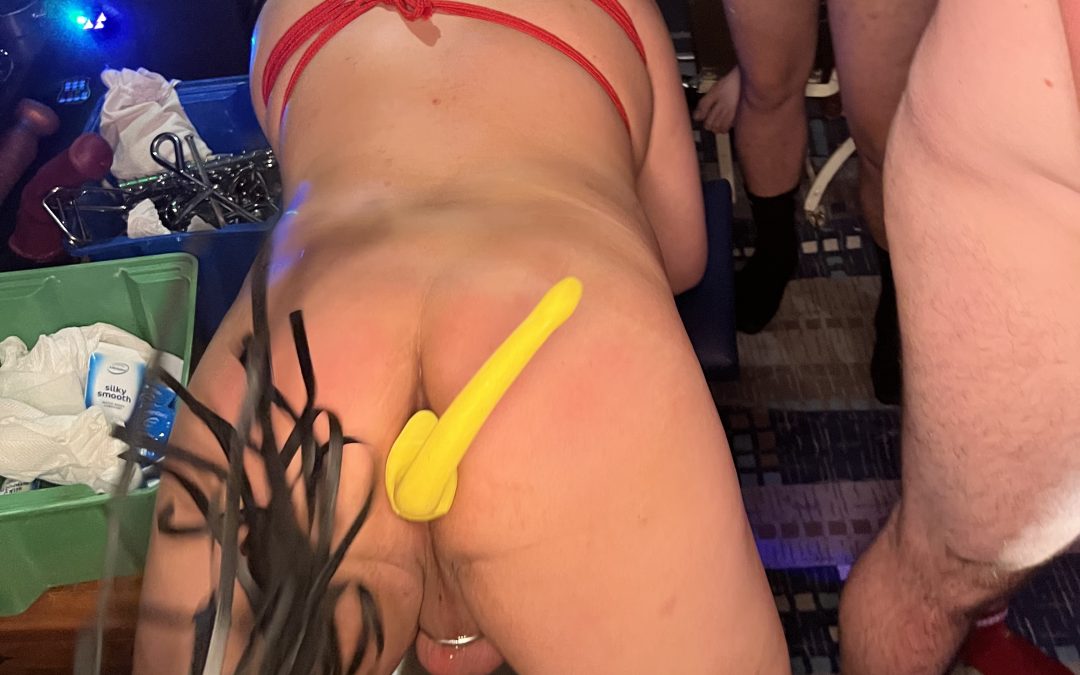 My first time going to an event by Soxter.

My master, Mister A was invited to the Star Wars party organised by Sir Soxter on May the fourth, and he wanted to bring me along to show off his newly acquired property.

The party was located in an older charming apartment building, with steel gates and an art deco flooring. It was a cold and wet night, as my master Mister A and I walked down the streets of Melbourne, wearing nothing but a long jacket to cover up the rope work that he did on me.

Entering the apartment, we were greeted by the host himself, Sir Soxter. The atmosphere was night and day comparing to the cold rain. Immediately what hit my brain was the smell of amyl wafting up my nostrils. As Sir Soxter introduced us to a few other party goers, everyone was already naked and joining together in the living room socialising.

Everyone was friendly greeting us with a cheeky smile, and as we stripped naked in the hallway, as I glanced up to see a wall of framed playbills of classic theatre productions, with cute shelf to ceiling bookshelves full of books and Art Decosculptures.

The mid century modern vibes stops when we enter the play room however, where the neutral walls changed into a darker tone, with a fully range of gear display that would make any kinkster jealous. The main focal point of the room is the suspended sling, and the walls of varying sizes butt toys glowed with flashing lights bouncing off the disco ball. At the corner, a St. Andrew’s Cross and a medical exam chair are used to tie up two submissives.

Moving into the living quarter, the party was fully on, with guys of all ages, shape and sizes kissing, chatting, and getting on their knees. As the moans get louder and louder, a few boys move on into the play room, and started edging the two tied up subs. As more people start to spread out into the space, Mister A and I was chatting with Sir Soxter. As a pain slut that I am, I am immediately drawn into the multitude of floggers and spanking paddle that Sir Soxter had on display, and with my Master’s permission, I got to try the double sided leather and fur paddle. The duality of pain and pleasure, the stiffness of the leather and the soft fur, the intoxicating smell of amyl and the site of beautiful boys having their fun brought me into a trance.

As the spanking continues, someone cheekily yelled out to try the “fire hydrant”.

Perplexed by the interjection and the name, I soon found myself laughing as I see an actual firemen hose attached to a handle as a paddler, among many other eclectic kinky toys that was beyond my imagination. This really sets the tone for the evening for me as a fun and a bit quirky party, where everyone can be themselves, where sex and kink meets in a playful setting, and everyone can explore something new with some great support and community.

As the night went on, I got even more comfortable in the setting. After fulling my goal for the night, which was to service my Master and Sir Soxter orally, my curiosity kicked in as I see a young cute boy getting himself on the sling in the middle of the room. Toys larger than anything I have ever seen in my life started to disappear in him with ease. Lube and amyl were free flowing as the moans were getting louder and louder, seeing the top’s digits, then knuckles, then the first hand in, it was my first time seeing a FF scene in real life. As an aspiring fisting bottom, I was there just right side of the top, mesmerized by the muscles movement as the sphincter relaxes, allowing one fist after another, punching repeatedly, as whimpers became moans, to became screams of pure pleasure and ecstasy. Exhilarated, @KKlau555S (Twitter) pushed me into a leather fuck bench, blind folded me and starting asking Mister A to hand him toys to play with my hole, albeit much more beginner friendly sizes. With my Sir by my side, I was plugged, flogged and face fucked like a true slut should be. I was gripping my hole tightly, as I felt each flog coming down harder and harder. The room burst into laughter, as my hole failed to grip onto the toy, and the humiliation was rushing to my brain faster than any amyl could, and I was straining harder in my cage than I ever had been before.

By the time I got off the fuck bench, there was already a smooth Asian twink, not much older than 19 with a wickedly cute smile in the sling. Restraint with cuffs and some blue rope work, Sir Soxter was working his hole from fingers to toys, as everyone stood around admiring the young boy’s body twitching as Sir Soxter move around in his hole, counting backwards to how many prostate massages he received. Soon, a sub top was ordered to move forward, getting sucked hard in preparation to fuck the boy in the sling. As he braced his ass for a huge English cock, Sir Soxter pulled him in for a passionate kiss, as his whole body relaxed, allowing for the monster cock to invade inside his delicate hole. Cock after cock, Sir Soxter kept kissing and edging his boy, the chemistry between them was as thick as the man musk in the room, as the boy kept on smiling his wickedly cheeky smile, clearly enjoying to be the show piece that our host had acquired for the party.

All up, it was a night of amazing first time experiences, all of which I am grateful for Soxter’s invitation to.