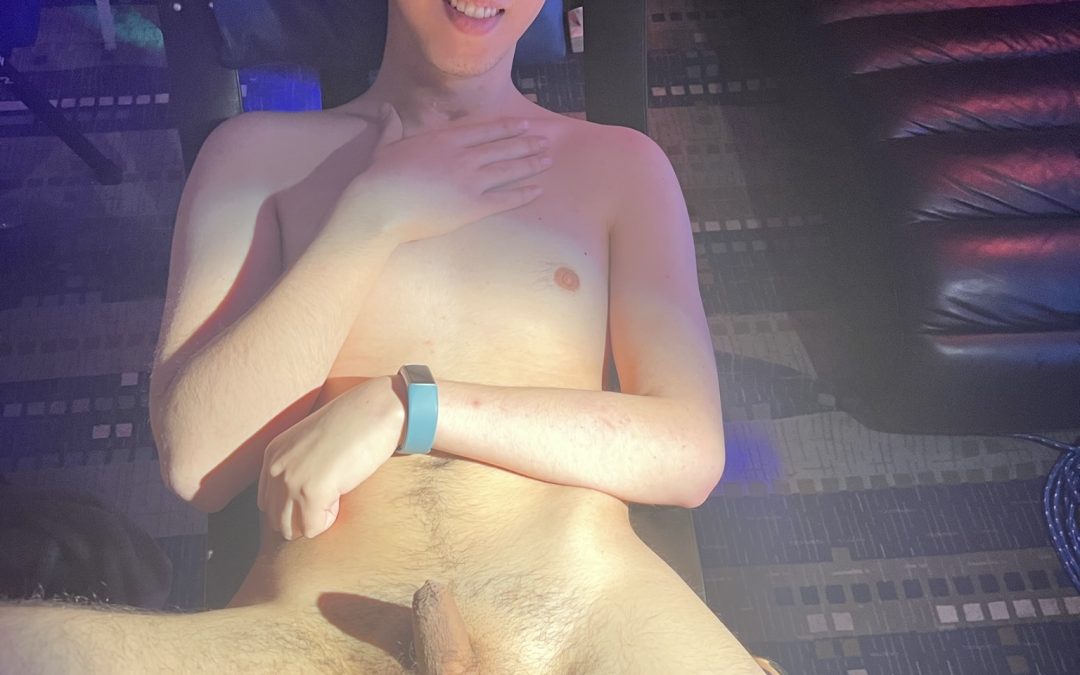 About the author: Ryan is a 25-year-old Uni student, wearing glasses and typically with his dark hair shaved into a mohawk. He is tall and slim, with a covering of hair stretching from his ankles to his naval courtesy of his Italian mother, and a smooth torso thereafter by way of his Chinese father. He dresses smartly in the street but prefers to be starkers behind closed doors. Let’s peek behind one such door now.

Soxster Studio was marvellously convenient to get to by public transport in the CBD, something I appreciate as I can’t walk far. As soon as I stepped in the door I was greeted by smiles, I didn’t know anyone there, but you couldn’t tell. A quick COVID RAT at the door for safety was a painless and easy precaution to set me at ease that this party was both safe and being organised by the right sort of person. People were already there when I arrived and chatting away, but all stopped towelcome me as I stepped into the main room. Andrew greeted me by name and with a beaming smile! I wasn’t sure he’d recognise me, even though we’d been speaking online for a while. But he knew right away! A light ribbing about how he’d already seen most of me on twitter, was a fun way to break the ice and remind me that I didn’t have anything to hide from the people here. (What a weight off one’s shoulders! The pizza was already there and still hot when I arrived, and I was encouraged to help myself.

I started with a glass of water and tough I was initially unsure about how to approach this room or who might have me, but Andrew directed me to a spare chair, and I gladly took the direction (I’m a little subby, so sue me! 😈

Having been told not to fully disrobe until the signal, I just took my shoes off and set my bag down. I looked up and there was an exceptionally cute young guy sitting on the end of the bed in front of me and so I figured I’d try my luck and moved to sit beside him. We got chatting and it was remarkably easy. That’s when the anxiety all started falling way. I’d told myself if I could make one friend that day, I’d be ok. It turns out I’d underestimated, how well I’d do with that target, but it was a promising start, nonetheless. We laughed easily as we got to know each other, and I started absentmindedly unbuttoning my shirt as we spoke. I had shucked it entirely by the time the last guest was accounted for, and Andrew drew the blinds to give ‘the signal’.

I’m a nudist/exhibitionist but it’s hard to judge how a new crowd would react. So, I let a couple other guys strip off first. They got down to jockstraps before I’d had time to look back up. I was wearing trunks which were quite a lot more covering than a jock so in the interest of fairness, I took my pants and underwear off in one go. I’m pleased to say I was the first one nude,but no one minded 😊

Some guys got at it right away, clearly familiar friends who had been itching to jump each other’s bones up to this point. There was even a set of boyfriends there, but they each leapt at different guys, so no concerns about getting between them.

I faced my fear almost immediately. I had happened to be in an area of the room with an odd number of guys and everyone was paired off except me. I lingered on the edge oof the fun wondering how much I could enjoy the ‘show’ without feeling like a perv. But Andrew wasn’t having any of that. Ever the attentive host, he swanned over and pointed out to me that for every guy face down sucking a cock, his own cock and asshole were unattended to. So that became a job I committed myself to. I was suggested (ordered? 🥵) to start by sucking the cock of a guy making out with someone else. I looked up at him for consent and he gave no objection, so I was relieved to fill my mouth with dick and get to work. After that it all fell seamlessly into place. As the configurations of bodies swapped around, I transitioned seamlessly from sucking one cock, to eating another ass, or jerking someone off while their hands were occupied. There was never a shortage of activity to participate in and my, ‘give it all a go’ attitude was well rewarded.

Guys I’d have been too intimidated to approach in any other context warmly invited me to put my mouth on them or asked me if they could use theirs on me, it was a real boost to my self-esteem to have so many successes in close succession, especially after a long absence from the sex/dating scene during COVID. I discovered that the first friend I’d made had been hiding a banging body and monster cock under his clothes but when I asked him what he liked to do, and he told me he liked to suck, letting him blow me was soon rewarded by me being invited to return the favour. His moans of appreciation were a wonderful reassurance that my efforts were appreciated. It felt tremendous to be good at something.

There were also things I’d never been sure about trying but which seemed right in the moment and in the encouraging atmosphere. So it was that for the first time in my life, feeling a little awkward, but still excited, I tried fingering and ass which wasn’t my own. He was on all fours attending to a cock, but his gorgeous ass was truly exposed, cheeks parted with a tight little hole on display begging or attention, and who am I to deny providence? My technique was tentative and clumsy at first, but he wasn’t shy about asking m e to apply so lube and push in deeper, so I took the instruction gleefully and smirked at Andrew who had wondered over with a pleased expression to catch the affair on film. A querying look sought my consent, and I smiled and offered it gladly. I idly wondered if I might fuck that perfect tight ass – currently cutting off circulation to my finger, with its power – later, and as fate would have it yes. I’d been primarily playing on the bed for most of the party, but I moved to investigate the sling room where I’d been hearing tell of fisting taking place (single and double). Not my scene, but I was curious…

The fisting was ok, but I had been promised by Andrew that he’d put me in there to teach me a thing or two about myself at some point, so I was interested in sizing the room up. There was no shortage of guys wanting to hop in, and the room was lovely and warm, with all the bodies, so I positioned myself there to jerk off and enjoy the show. I had been planning to stick with that when my friend from the beginning started pleading for a new cock in him after his last top had pulled out leaving him bereft in the sling. Anything for a friend, right? So with mine being the most available hard cock in the room, I stepped up to bat. For the second time in my life, I attempted to top. It was strange and I had no idea what I was doing but everyone encouraged me along, no better an atmosphere to learn in. Andrew even gave me a firm push on the ass to shove me in when it looked like I was a little uncertain. He helped me get my rhythm and in turn, we got a bottom moaning, it was a brilliant team effort. By the time I was ready to move on, there was someone else to tap in and relieve me. Truly a dependable group!

I had intended to arrive around one and expected that I’d probably only stay until about 4.00 pm having been told it would run to 5.00. But it became obvious I was going to be extending my stay. I intended to make sure I got my turn in the sling.

I made a little chat with the remaining guys in the main room while I redressed and even found out one of them had authored an article which I realised would be useful for me to cite in my work at uni. You really can network in the most unlikely places!

We the last few guys, all helped each other get home, the main group made plans to catch a train together from Flinders Street, but helpfully pointed me towards the more nearby Parliament station when I expressed not wanting to walk as far. I’ve been loving the influx of new attention o my titter since being tagged in the photos and videos Andrew has posted and I can’t wait for the next party so I can push myself to try more new things and make new friendships ahemdeeper!