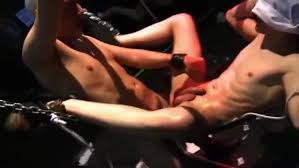 A write up of a Mare’s experience at Fickstutenmarkt Enjoy!

Hey Soxster I owe you two accounts.  I will start with my ‘virgin’ trip to fickstutenmarkt (that much talked about horse fair in various German cities) in Leipzig.  Why Leipzig and not Berlin?  Timing.  I couldn’t make the one in Berlin (personal scheduling issues).  What I did manage to do was to arrange a Thursday at Lab-oratory and then Saturday at fickstutenmarkt in Leipzig (only 1hr 20mins away by train from Berlin).  Not to mention that Leipzig’s a lovely historical city with great architecture but I digress.

I arrived in Leipzig on a Friday, already exhausted (but satisfied) from a great night at Lab-oratory’s Naked Sex Party.  I decided to walk the city that evening and scout out Cocks bar where the event was to be held.

On Saturday, I was ALL nervous energy.  I did a long run at the hotel gym and worked out a little.  I read Eric’s entry on fickstutenmarkt on Soxster’s site just to get myself in some frame of mind.  But somehow his account of his pre-event nerves only made me more anxious!  Being a total bottom, I was all set to be a mare for the night.  It was a strange mixture of wild anticipation and fear – if no stallion was interested in me as a mare, it would not help my self esteem.

My hotel was an easy 10 minute walk to Cocks bar (venue for the fair) but it was  LONG 10 minute walk through the Saturday Christmas crowd and light snow (an interesting contrast to the fucking to take place later).  ‘What if no one was interested in my ass?’ ‘What if I was left out there, ass in the air, with no takers?’  I thought back to all the great experiences I had in Berlin Lab and told myself it would be ok.

I got there early.  The place was empty.  Not a good sign.  So I decided to stay warm at a nearby café and just wait it out.  Heart bursting inside.  When I returned, there was a small line forming along the stairwell – despite the snow, these hot Germans sure can head out for sex.  The organizers were friendly and stable guys showed me what I had to do.  Eric was exactly right in his write up – the whole process of being brought to a room with other mares, made to strip, have a number written on you and photographed was degradingly hot.

I got to the bar to order a beer and relax.  The vibe was tense but not in a competitive way – the mares were friendly.  Just heavy with anticipation.  I think the nerves truly disappeared when an older (and athletic) mare from Munich came up to me and said ‘you are very nice…’ as he grabbed my ass.  ‘You are going to be busy tonight,’ he told me.  Then he drags me to one of the many dark mazes and asks to fuck me.  He assures me that it’s ok for mares to fuck each other before the event starts (I cannot confirm this).  So I let him fuck me for a little while with the fear that the stable hands much catch me and kick me out.  A Mexican mare comes by and just as the Munich guy pulls out from me, the Mexican mare slips on a condom and fucks me.  At this point, I am getting fucked by two guys before the event starts (still not sure if this is ‘legal’ in fickstutenmarkt terms and I apologise if I broke any rules).

The Munich guy is friendly and advises me to position myself with him.  There is still a decent wait for the stallions to be let in but the pre-event fuck and the on-going chat with the Munich guy warms me up and by now I am raring to go.  Helped also by a passing athletic blond mare who points at my ass and says ‘not bad at all, good good’ in heavily accented English.

Soon, we get hooded and the Munich guy and I lean over a bench with our asses sticking out.  I hear lots of footsteps – presumably those of the stallions and I readied myself for a wait as stallions would be ‘shopping’ around.  But I was surprised to feel a big rough hand on my ass, happening soon after hearing the opening of doors.  At this point, I was all engines go as a slut mare.  I started sucking his cock – thick and veiny.  Soon after, I was spun around and he slipped on a condom while I lubed myself up.  As I took a hit of poppers, the thick cock found itself inside me and I was moaning loud.  The Munich guy held my hand in solidarity – hot.  I could feel another set of hands feeling me up and felt another cock next to me – this one longer but less thick.  The first fucker gave way to this new stallion and the idea of me being tagged team fucked thrilled me.  A third stallion swung by and made me swallow his even thicker cock.  And almost without pause, the 2nd stallion passed me to this third.  He was tall, bearded and rough.  I’m 1.79 m but this guy felt like a head taller.  He grabs me, pins me hard to the wall and fucks me.  It felt like a rape as he talks rough to me in German – I don’t understand a word but it’s great.  I am then forced to bend over to suck another cock while he fucks me.  I am spit-roasted.

I try to keep count of the number of stallions that cover me but I lose count after stallion 11 or 12 and some could have been repeats.  Throughout I was in a dizzy sex haze heightened by the beer, poppers, hood and the spinning around of my naked body as they made me take cocks in different positions.  I took 1 break throughout the night.  The stable hand leads me to lit rest area.  He unties my hood and plays with my ass and pats me – like a little animal.  Stable hands were great throughout.

Some of the night’s highlights included sitting on a stallions cock while other stallions walked by, played with my nipples, cock and kissed me hard and then walked on by.  Being fucked on a sling was also memorable – I could tell that I was taking in a stallion while two others watched.  Past experiences on slings definitely paid off.  Another hot moment was when I was fucked by a stallion while I held on to the entrance way of a maze.  I could sense other stallions watching, feeling me, twisting my nipples, like testing the product for possible use.  One kept putting his hand in my mouth, pulling my jaws wide like inspecting a real mare’s mouth.

The night ended for me not quite voluntarily as I was still being ploughed in the ass when the organisers started calling out.  The stallion mounting me whispers in English to me that it’s over and in the next moment, the stable hand holds me gently and leads me to the lit changing room.  There were only two other mares left (I think) and one of them is the Munich guy.  He gives a big smile when he sees me.  He goes ‘you kept going all night ya?’  And one of the stable hands joins in to tease me saying that I was screaming and moaning loud while getting mass fucked.  I stand there naked and smile, waiting for my trash bag of clothes.  What’s great is that the vibe is always friendly, fun and non-threatening.  As I get dressed, the Munich guy asks me if I can head to the next door gay sauna with him as he wants to fuck me.  I politely decline and tell him that I am exhausted (my body was happily aching and I was starving).  He understands and we say goodbye.

I think I am now spoiled by big German cocks.  I’m already planning another fickstutenmarkt for next year.

For those interested in going to this fair for the first time, I would be happy to answer any questions.

A note from Andrew – the image for this post is from the Fickstutenmarkt film by Berlin Star which is a really accurate depiction of what happens – only with fewer boys. A real Fickstutenmarkt has much more people attending.