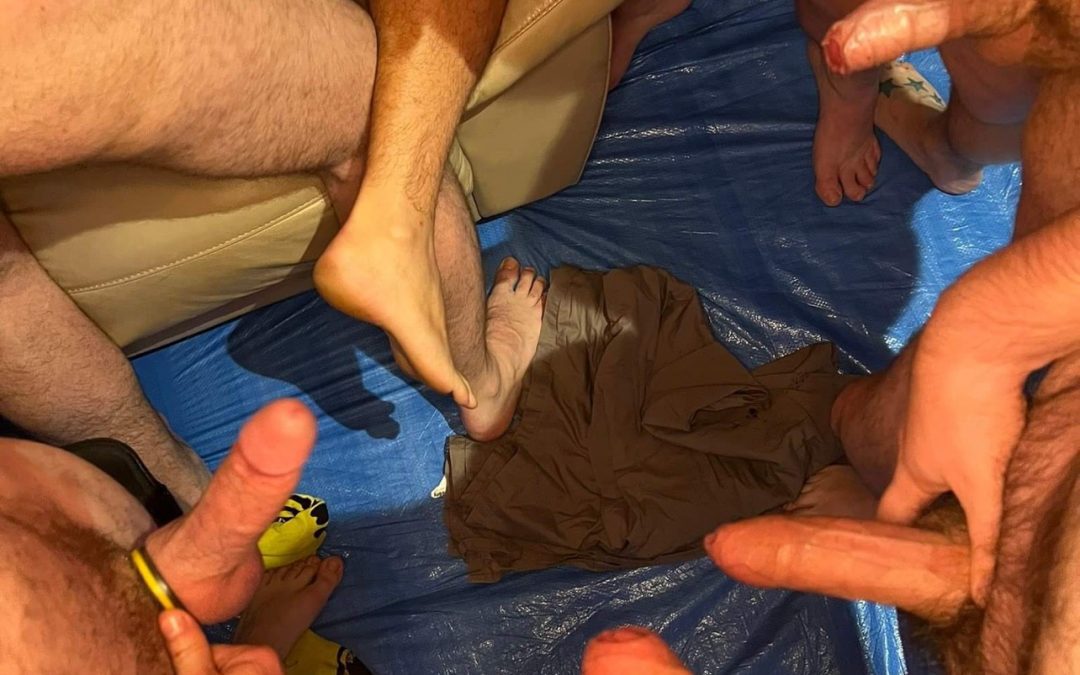 A write up of the Wolfenoot forty person party by Pup Nebby (https://twitter.com/pupnebby). Enjoy!

I was ready for liberation and so after reaching out to Soxster on twitter after some dutch courage, I was locked in ready to go. As a pup, the theme was very on brand.

Although the idea of group sex was something I’d considered a fair bit over the past 6 months, I always got shy of the idea because who would want me? I don’t feel like I’m anything special, and my many anxieties always let me down – but not this time.

I arrived at the host’s house at around 6.15, very anxious, very nervous, not to know what to expect or what the experience was going to entail. I enter and was greeted by a sex swing and a myriad of toys and supplies laying around at convenient and easy to access locations. The hosts had gone to great lengths to ensure guests had everything they needed to get down and dirty.

Other guests had arrived before me and were in various degrees of undress, from naked, to t-shirt and jocks, or just pants. I go and take my bag upstairs and while the expectation is that clothes should come off no later than 7.30, I thought I would dip my toe in and at least be in some kind of undress. Plus, I was wearing one of my favourite blue harnesses, so of course I had to show that off. Everyone was very kind and sociable which helped me relax.

After 45 minutes of pleasantries, things started heating up with one of the pup guests getting tied up, with another kind stud getting on their knees and sucking him off. I was ready. This began the start of Wolfenoot.

A guy to my right saw me watching/glancing over so came over to me and began offering me the same service, being kissed and played with, getting me all excited. One thing to note is that any playing of my cock results in a lot of pre-cum leaking out so this was a running theme all night. I was told many times just how good my wet cock tasted.

After, the stars that kicked off the show came to say hello, and within minutes I was on my knees offering my mouth to the pup. He was so hard, you could literally feel his dick throb in your mouth. Yum. Once I’d finished giving this pup a treat, the three of us went upstairs to use the the sex swing, with the puppy going first and me giving my cock to the bottom to suck on and gag his moans.

15 minutes of constant pounding later, and the bottom needed a break, so someone else offered themselves to the swing and we kept on going. So. Fucking. Hot.

I needed a break myself so I headed down for a breather, but before I could, I found the first bottom from the swing and I had him pinned up against the wall, arms above his head pounding him. Just hearing his breathless moans as I go from pounding as fast as I could, to as hard as I could. Ooof.

We then changed positions and I sat in the armchair and he began to ride me at which point I asked him to put his pup hood on – it was the theme of course. And he was such a good boy, he rode me so good and gave out many happy puppy noises.

Now I really did need a break, so I headed over to the kitchen ‘rest’ area and just observed everyone having so much fun. The music was good, the people were great, and it was a really charged and positive environment.

The night continued as it had, and I fucked a few more boys that were ready to be pounded before ending the evening by shooting my load across someones face who was keen for a LOT of facials. Perhaps I was the 5th or 6th? Who could turn down an offer like that?

I stayed for a fairly decent amount of time, and even as I was leaving people were still having a great time (literally as I was walking out the door, a puppy was offering himself as a urinal so of course I had to indulge).

I finished the evening feeling great, fantastic, liberated. The hosts do an amazing job to really make sure that attendees are going to be a match to the kind of atmosphere they’re striving for. I’m reminded of the All-Black’s “No dickheads” policy. Guests were respectful, communicative, but ready to engage and get down and dirty.

It was a fantastic experience and I would recommend it to anyone.

Top tips?
Don’t overthink it.
Communicate and engage.
Enjoy yourself. You’re there to have fun!