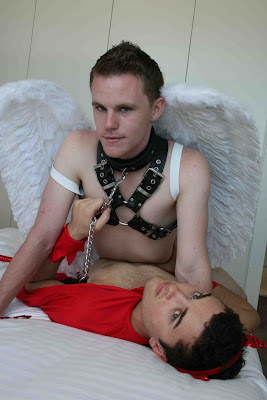 At their last shoot I asked Levi and Declan what they would be interested in doing on camera next time. They gave me a couple of ideas, including filming outside or filming something as a devil and angel (with Levi as the devil and Declan as the angel). When they turned up for the shoot they didn’t know what Soxster had planned – and we’ve got a great video of them going into the room where their costumes were laid out. I gave the angel costume a bit of a twist, with some leather as well. They both looked amazing and were really excited with the gear. I learned a lot on this shoot. For example, if a boy wearing angel wings rides someone, then the wings appear to flap as they get fucked. Also learned that vigorous fucking makes angel wings shed feathers which tend to attach to any areas with lube or precum. There’s just something adorable about Levi getting the feathers out of his foreskin as he gets ready to fuck Declan. So fun to shoot, it will be great to watch. Levi and Declan are now officially together as a couple so we hope to see them doing shoots for Soxster for many years to come!